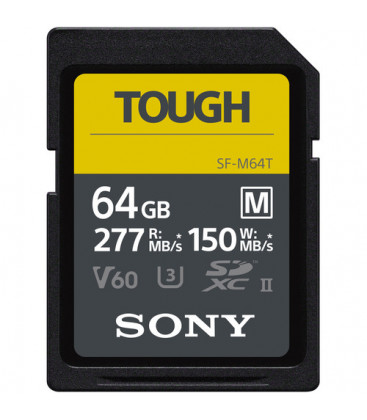 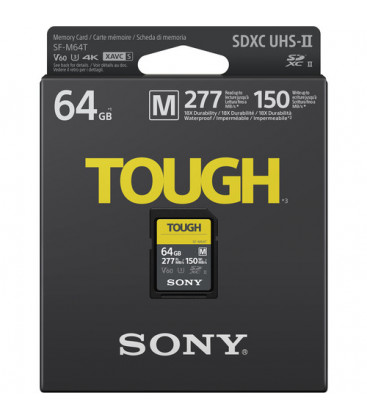 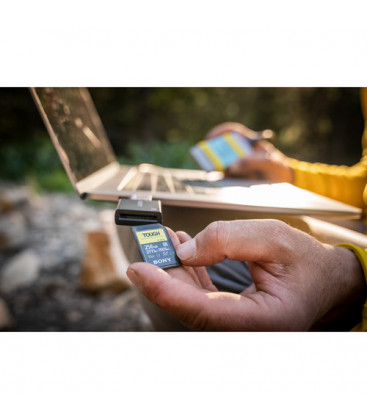 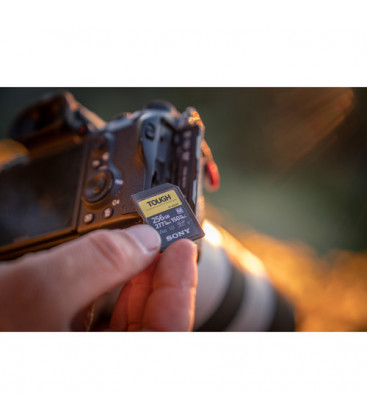 Sony UHS-II M Tough series Class 10 / U3 / V60 Read 277 MB / s / Write 150 MB / s
Sony UHS-II M Tough series Class 10 / U3 / V60 Read 277 MB / s / Write 150 MB / s
1020235
GARANTIE 60 MOIS
En savoir plus
Sony SF-M Tough SDHC 64GB UHS-II 277MBs
The 64GB SF-M Tough Series UHS-II SDXC Memory Card from Sony features a storage capacity of 64GB and takes advantage of the UHS-II bus to support advanced DSLR functions such as continuous shutter bursts and rapid shooting, as well as RAW and JPEG captures. This card is also well-suited for video capture, including 4K, Full HD, and 3D video. It can achieve maximum read speeds of up to 277 MB/s and maximum write speeds of up to 150 MB/s. Thanks to its V60 speed class rating, minimum write speeds are guaranteed not to drop below 60 MB/s.
To help facilitate card usage in almost any environment, as well as keeping your content safe, Sony has built the Tough Series with a rugged design that can withstand drops up to 16.4' / 5m, immersion in up to 16.4' / 5m of water for up to 72 hours, and is bend and dust proof, as well as able to withstand temperature extremes from -13 to 185°F. The Tough Series is also up to 18 times stronger than standard SD media (180N compared to 10N) and features a one-piece molded construction that is ribless with no write protect switch, helping to further guard against physical damage that can affect SD cards, such as a broken plastic casing, a broken data protection lock, and broken connector ribs. Should the card's data become compromised, you also benefit from the option to download File Rescue software for free to help recover deleted content.
UHS-II media achieves its speed through an extra row of pins and while this card has been designed for cameras that are UHS-II / V60 compatible, it may be used in devices that do not support UHS-II / V60. However, bear in mind that this card will then default to your device's speed class and bus rating, such as UHS-II and V30, which supports minimum write speeds of 30 MB/s, or UHS-I and U3, which also supports minimum write speeds of 30 MB/s. If your device does not support U3, this card is compatible with the U1 and Class 10 standards, each of which guarantees minimum write speeds of 10 MB/s. When used in a UHS-I device, this card delivers read speeds of up to 95 MB/s and write speeds of up to 90 MB/s.
General Features
Tough SD Card
When you're shooting in challenging environments, this card will deliver for a wide range of professional photographers and videographers, as well as photo enthusiasts, since they're rugged enough for extreme shoots. With rock solid reliability and fast speeds, you have all the performance you need to catch the action.
More Bending Resistance
An strong resin-molded design makes this cards 18 times more resistant to bending than the SD standard.
IP68 Waterproof and Dustproof
This card can be immersed in 16.4' of water for up to 72 hours, and is also dustproof. That's total protection for shooting in almost any condition.
Shock Resistant - Withstands Drops up to 16.4'
Made from rock-solid materials in a one-piece mold, this card withstands drops of up to 16.4'
One-Piece Molded Design
With a one-piece molded design and high-durability materials, this card gives professionals and photo enthusiasts peace of mind and protection wherever their shoots take them.
Ribless, Write Protect Switchless Design
In designing this card, Sony got rid of the fragile connector ribs and write-protect switch found on conventional SD cards - parts which are easy to break and can prevent writing.
Speed You Can Rely On
Whether you're a professional photographer shooting high-resolution still images, a videographer working in 4K on a documentary, or a photo enthusiast exploring remote landscapes, this card has the speed you need to capture the action. It provides fast buffer clearing time after burst shooting and efficiently transfers content to a computer.
Rapid Write Speeds
With fast write speeds of up to 150 MB/s, this card supports longer burst shooting of high-resolution photos, as well as faster buffer memory clearing.
Fast Backup and Data Transfer
Spend more time shooting and less time transferring or backing up. With fast read speeds up to 277 MB/s, you can quickly transfer large media files to a computer.
Optimized for High-Resolution Video with V60
Sony's SF-M media supports the V60 Video Speed Class for stable 4K recordings and high-bitrate video capture. This is good for shooting all kinds of high-resolution video.
SD Scan Utility
The downloadable SD Scan Utility automatically scans your SD card's memory, keeping you informed of its condition so you can take action before its limit is reached.
File Rescue
Even when things go wrong, you can avoid disaster with downloadable File Rescue software that recovers photo and video files that have been accidentally deleted or that cannot be played back.