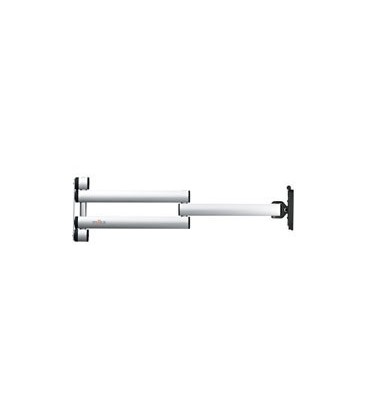 The folding monitor arm is a reinforced, two-part, articulated arm with VESA 75/100 standard attachment and quick-release catch and pole-clamp. Monitors weighing up to 10kg can be pivoted horizontally for optimum location on the Monitor Arm XL and up to 15kg on the XS, M, and SL models. A sophisticated ball-and-socket joint at the end of the arm permits precise screen alignment for optimum viewing. The arm can be locked at any point vertically on the pole. The Monitor Arm is available in four lengths, XS a swivel-only monitor support, M which has a turn radius of 505mm. XL which has a radius of 700mm and SL which has a radius of 450mm. All versions are available in either aluminium or black finish.﻿