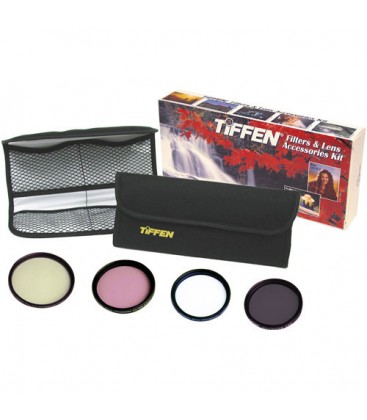 This kit contains the following 72mm filters: Tiffen Color Graduated Neutral Density .6, Pro Mist 1/4, Enhancing, Gold Diffusion FX 1/2 and a Soft Pouch.
Neutral Density
Often it is necessary or desirable to balance the light intensity in one part of a scene with another. This is especially true in situations where you don't have total light control, as in bright contrasty landscapes. Exposing for the foreground will produce a washed-out, over-exposed sky while exposing for the sky will leave the foreground dark and under-exposed. Grad ND filters are part clear, part neutral density. They allow the transition to be blended into the scene, often imperceptibly. Tiffen offers screw-in type graduated filters, in a rotating mount, with a .6-to-clear ratio (two stop compensation at the top), which will generally compensate the average bright sky-to-foreground situation.
Pro Mist Filters
Pro-Mist Filters, part of Tiffen's Hollywood/FX Series, generally produce highlight flare that appears more as a "halo" than does the more outwardly extending flare of a fog filter. By keeping the flare closer to the subject, they create an almost pearlescent glow to highlights. Available in various degrees of diffusion strength (with Grade 5 having the strongest effect), the lower grades of the filter also find use in toning down the excessive sharpness and contrast of modern film and lens combinations without detracting from the image. The Black Pro-Mist series of filters also creates moderate image softening and modest-to-strong highlight flare, but without as much of a lightening effect in the shadow areas.
Both of these filters are also available in a "Warm" Series which combines the Pro Mist effect with Tiffen's exlusive 812 warming filter.
Enhancing Filters
The Tiffen Enhancing filter is a combination of rare earth elements in glass. It removes a portion of the spectrum in the orange region, increasing the color saturation of reddish objects by eliminating the muddy tones and maximizing the red hues with minimal effect on other colors. Its most frequent use is for obtaining strongly saturated photographs of fall foliage.
Gold Diffusion F/X Filters
Tiffen Gold Diffusion/FX filters are soft focus filters. They are made with an irregular gold pattern which softens smaller details, like wrinkles and skin blemishes, while leaving larger details such as the eyes sharp. Tiffen Gold Diffusion/FX filters are available in grades from one-half through five, with grade 5 having the greatest effect. This filter is most effective when the photographer wishes to add a "soft golden warmth" to portraits.
BESOIN D'AIDE ?