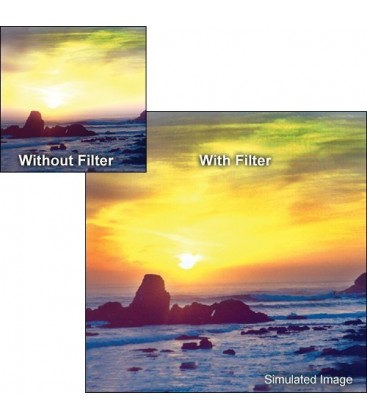 The Formatt 4 x 5.65" Graduated Reverse Neutral Density (ND) 0.6Filter is a unique filter that allows you to shoot sunrises and sunsets while still retaining detail in the foreground. Traditional graduated neutral density filters filter from the top of the filter downwards and allow you to balance a bright, contrasty sky with a dark foreground. However, this innovative filter works in just the opposite way. The transition starts in the middle and works its way to the top thereby allowing you to control the light where it is brightest (horizon) while holding detail in the foreground.

Formatt, a company with three generations of professional filter-making experience produces every filter to the highest technical standards. The finest materials, together with state of-the-art production technology have resulted in a standard of optical excellence unmatched anywhere else.

- To enable slow shutter speeds to be used, especially with high speed ISOs, to record movement in subjects such as waterfalls, clouds, or cars

- To decrease depth of field by allowing wider apertures to be used, which helps separate subjects from their background

- To allow cine and video cameras (which have fixed shutter speeds) to film subjects such as snow, sand or other bright scenes which could cause overexposure﻿