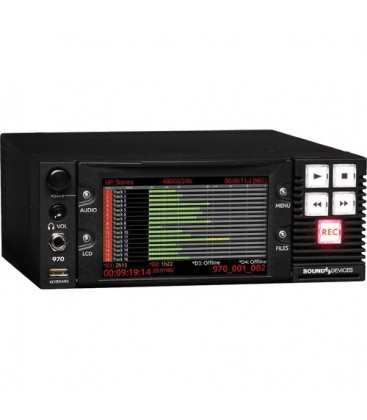 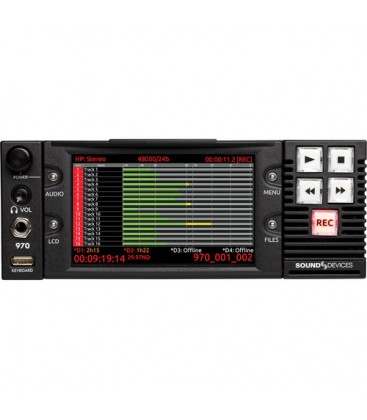 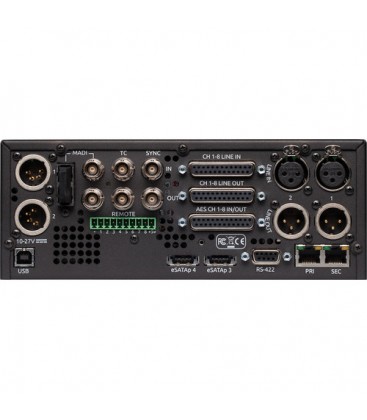 Rack-mounted audio recorder with time code. 64-track mono or polyphonic WAV file recording
Rack-mounted audio recorder with time code. 64-track mono or polyphonic WAV file recording
1017099
GARANTIE 12 MOIS
En savoir plus
Sound-Devices Rack-mounted audio recorder
The Sound Devices 970: 64-Track Dante And MADI Audio Recorder is a 2RU half-rack rackmountable multi-track audio recorder designed for mission critical applications that require high track counts with metadata support and network connectivity through the Dante and MADI protocols. This is useful for recording engineers using sound carts or for installed applications such as at broadcast news network.
For I/O the recorder features eight analog input channels via D-SUB connector, eight channels of professional AES digital inputs via D-SUB, MADI IN and OUT, and DANTE IN and OUT. It also features a headphone input with volume control on the front panel. The unit can record up to 64 mono or polyphonic .WAV tracks at 24-bit 48 kHz resolution from any of its 144 available inputs. It can also record a maximum of 32 channels at a maximum resolution of 24-bit at 96 kHz and can convert between any of the available recording formats internally.
For storage, the unit can record to up to four drives (two internal behind the display and two over rear eSATA connections) in either serial mode one after the other or to multiple drives simultaneously for redundant backups.
In the event of power loss, the unit will instantaneously switch over to its internal battery to save and close all files to ensure against data loss. It features a built-in Ambient Timecode generator which can act as a master clock. Alternatively it can be clocked to external devices with full support for common production modes and time code rates. Each input features an SRC to streamline and simplify the connection to multiple digital inputs.
The recorder can be controlled via the front panel LCD-based user interface or over an Ethernet network connected to a browser-capable computer or tablet.
DANTE
Records up to 64 channels of monophonic or polyphonic 24-bit 48 kHz wave files of Ethernet-based DANTE format from any of 144 available input connections
MADI
Records up to 64 channels of monophonic or polyphonic 24-bit 48 kHz wave files of optical or coaxial MADI from any of 144 available input connections
96 kHz Recording
Supports up to 32 tracks of simultaneous recording at 96 kHz sample rate
Simultaneous Multi-Drive Recording
Records to any of four attached drives through two front-panel drive bays and two rear-panel e-SATA connections in either simultaneous backup or sequential modes
Perfect Sync
Utilizes built-in Ambient Timecode generator to operate as either master clock or synced to external clock with full support for external word clock, video MADI, or AES with SRC's available at each input
PowerSafe
Provides a constant 10-second power reserve to ensure that files are saved and that the recorder is properly shut down in the event of power loss
Dual Power Supplies
Enables redundant powering of the recorder from 10 to 27 VDC through 4-pin XLR connectors
Network Connectivity
Enables browser control from compatible computers and tablets including transport and setup menus on PIXNET networks with support for one or multiple recorders that can be controlled simultaneously
User Interface
Enables rapid control over the audio recorder with key controls being only a knob or switch away and with extended features that are accessible through the LCD display