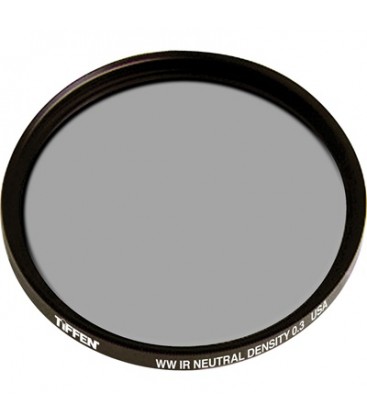 82MM WW IR ND.3 FILTER
82MM WW IR ND.3 FILTER
193469
GARANTIE 120 MOIS
En savoir plus
Tiffen 82mm Solid Neutral Density Infrared (IR) 0.3 Filter
The 82mm Solid Neutral Density Infrared (IR) 0.3 Filter from Tiffen has several uses and offers the possibility to achieve otherwise unachievable results. This filter provides clearer and purer neutral density than provided by standard ND filters. The benefit is that it works better with today's hi-definition cameras and lenses. Because of this enhanced clarity, stronger grade ND filters can be used while still enabling the shooter to adjust exposure without affecting colour balance.
ND filters appear gray and reduce the amount of light reaching the either the sensor of a digital camera or the film plane of a traditional film camera. Neutral Density filters are used to create some unusual special effects such as capturing the "blur" of the rippling water of a waterfall or the swirling effect of city traffic. Since they allow the use of slower shutter speeds in bright light, it becomes possible to create these special effects that would normally not be possible to capture without the filter. And since they can also help to control your depth of field, they permit you to shoot at wider apertures. Ultimately, their value is in helping to prevent bright, overly washed out images shot in bright light.
A 0.3 Neutral Density filter is traditionally considered the first step on the ND ladder. It requires a one stop exposure compensation. It will prevent you from overexposing in a bright scenario and permits you to shoot at a wider aperture that will have a direct effect on your depth of field. You will be able to isolate a subject by throwing the fore/background out of focus. Shooting at a slower shutter speed will also allow you to create some blur in the image.
Water White glass, incorporating ColorCore technology, is characterised by a high transmission quality. Typically, it will transmit 98-99% of the light. It also features an anti-glare and anti-reflective quality that makes it useful in a wide range of uses including the movie theatre industry, store and art displays. The glass is virtually defect-free and is becoming more and more prevalent in digital equipment.
Key Features
Reduces Infrared Bleed Above 700nm
- This is particularly important as it now allows for the use of the heavier grades of neutral density filters needed for hi definition cameras while, at the same time, maintaining complete colour balance
Neutral Density Filters Have Four Main Uses
-To enable slow shutter speeds to be used, especially with high speed ISOs, to record movement in subjects such as waterfalls, clouds, or cars
- To decrease depth of field by allowing wider apertures to be used, which helps separate subjects from their background
- To decrease the effective ISO of high speed film (above ISO 400) and allow it to be used outdoors in bright situations
- To allow cine and video cameras (which have fixed shutter speeds) to film subjects such as snow, sand or other bright scenes which could cause overexposure
Superior Quality
- Top Hollywood motion picture studios rely on Tiffen filters for their multimillion-dollar productions Superior quality and design make Tiffen the overwhelming choice of moviemakers, professional photographers and even NASA
- Tiffen has also been awarded an Emmy, from the Academy of Television Arts and Sciences, for its engineering excellence
- Tiffen, a leader in the filter industry, proudly makes its filters in the USA