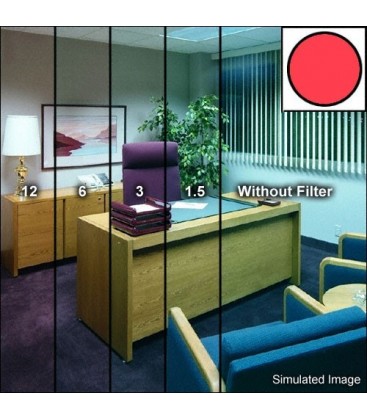 Tiffen Decamired Glass Filters - For those who want a sure-fire way of getting accurate color temperature readings, the decamired system is the way to go. Using this formula, you can transpose temperatures from one point to another easily and quickly. This system is also useful when you wish to bring a certain amount of creativity to color photography.

Applications include keeping color temperature constant during the course of the day and producing the effect of different times of day. Available in two series, reddish filters that warm the light and bluish filters that cool the light. Each series contains 4 densities: 1.5, 3, 6, and 12. Filters in the same series can be combined.

Decamired filters are designed to more easily handle unusual color temperature variations than the previously mentioned filters. Available in increments of both a red and a blue series, Decamired filters can be readily combined to create almost any required correction. In measuring the color temperature of the light source, and comparing it to that for which the film was designed, we can predict the required filtration fairly well.


To use this concept, subtract the mired value of the light source from that of the film. If the answer is positive, you need a reddish filter; if negative, use a bluish filter. Mired-coordinated filters are termed as decamireds. Mired value divided by ten yields decamireds. The 60 mired shifts, above, would be produced by an R6 filter, where the higher values were that of the lighting.

Sets of such filters generally come in values of 1.5, 3, 6, and 12 decamireds in both B (bluish) and R (reddish) colors. These numbers are additive; that is, a pair of R3's produces an R6. An R6 plus a B6 cancel each other out to produce a neutral gray.


- Tiffen filters are manufactured using ColorCore technology, a closely guarded proprietary process that entails permanently laminating the filter material in between two pieces of optical glass that are ground flat to tolerances of a ten-thousandth of an inch, then mounting them in precision metal rings
- The ColorCore process allows Tiffen to control the color and density of their filters, and the characteristics of special effects filters with much greater accuracy than typical dyed-in-the-mass filters, which usually exhibit color and density variations


- Top Hollywood motion picture studios rely on Tiffen filters for their multimillion-dollar productions
- Superior quality and design make Tiffen the overwhelming choice of moviemakers, professional photographers and even NASA
- Tiffen has also been awarded an Emmy, from the Academy of Television Arts and Sciences, for its engineering excellence