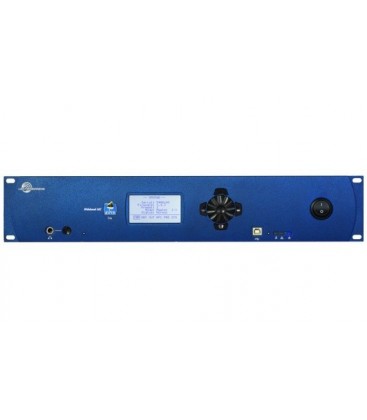 The SPNTWB combines the boards from the SPN812 and the SPNCWB in a 2RU chassis to provide a complete, stand-alone component for telepresence and audio conference systems. The unit can be used with additional ASPEN processors to add additional inputs and outputs. Setup and adjustments can be made using the control panel software or the front panel LCD interface. Inputs and outputs appearing on the LCD have been consolidated into logical groups to simplify navigation.

The ASPEN AEC (acoustic echo canceller) provides new and advanced algorithms developed to address the need for a single acoustic echo canceller that could handle the challenges of multi-site bridging and an unlimited number of microphones. The AEC converges very quickly, then continues to increase the cancellation depth at every opportunity as a conference continues. Cancellation depth will increase even with brief signal peaks from the far end, and convergence will never be lost with any type of signal or in double talk situations.

The AEC in combination with the patented gain proportional mixing algorithm* provides outstanding audio quality without echo heard at the far ends.

The proprietary noise reduction filter used in ASPEN processors is a third octave dynamic processor which is very effective when applied to the far end Codec and telephone line signals when poor connections occur.

A two channel power amplifier is included for loudspeakers in the local sound system. The power amplifier is driven by final mix outputs from the matrix and has a full set of signal processing, including parametric EQ, compressor and limiter. Class-D amplification is implemented with a late generation component that provides exceptional efficiency, low heat, excellent audio performance and cannot be damaged by wiring errors.