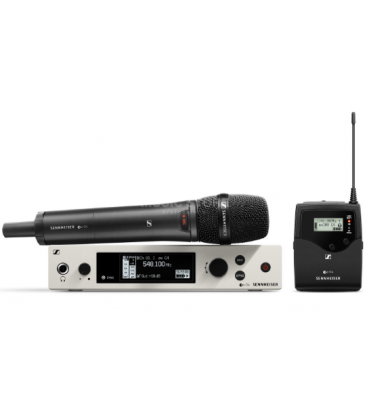 The G4 exceeds expectations with increased switching bandwidth of up to 88 MHz in the 300 and 500 series. G4 offers full flexibility for a wide range of possible applications: live sound, in-ear monitoring, portable solutions for ENG and professional film productions. It is mobile, always on air, and evolves with users and their demands.

G4’s 100 series systems can be daisy chained for fast, coordinated setup via a new linking function. G4’s intuitive LCD and OLED displays make the lives of engineers easier in any environment. The G4 keeps you connected. For mobile PA applications, the receivers slot directly into the LSP 500 wireless loudspeaker. Integrators adore G4’s versatility when it comes to workflows and control software such as the WSM (Wireless Systems Manager) and the Sennheiser Control Cockpit.

When it comes to applications in hospitality, education and events, G4 is your mobile solution that fits into any room and perfectly integrates into existing workflows. Documentary filmmakers and video journalists know that G4 fits into any bag and provides powerful speech intelligibility for their interviews or reports. For years, evolution wireless G3 has been one of the best-selling wireless systems in the market. evolution wireless G4 takes this legacy one step further with more power, features and flexibility.﻿

- Fully compatible with all previous series

- Brand New Sets - New Base Sets allow use of existing capsules and mics: Base SK, Base SKM and Base Combo (with SK and SKM)