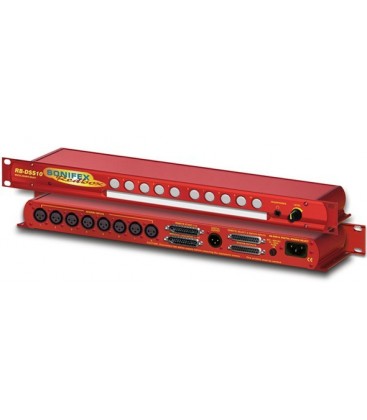 The RB-DSS10 digital source selector is a 1U rack-mount which produces an AES/EBU and S/PDIF level digital audio output from 10 selectable AES/EBU or S/PDIF digital input signals. There are 10 illuminated front panel push-buttons, which select and indicate the current channel selection. The selection and indication is also available through a remote connector on the rear panel. To stop accidental front panel selection there is a remote input to inhibit the front panel buttons.

Once the receiver has successfully locked to a digital input, the LED illuminates, the tally is made, and the audio is routed simultaneously to both the digital audio outputs and converted to analogue audio for monitoring on the front panel headphone socket. If the incoming audio signal is not present, the push-button LED and remote tally flash to indicate that the incoming digital signal is missing.

The headphone output has its own volume control, which is independent of the level adjustment for the main outputs, and has a maximum output level of +12dBu.

As well as routing the selected audio signal, the unit will also route a remote signal input through the remote connector to the selected input source, for starting external audio equipment, such as a CD player.

There is a designation strip on the front panel, useful for giving the buttons a meaningful description. The LED on the front panel is used to indicate that power is present on the unit. However, it also has a secondary role to indicate whether the selected channel is routing the AES/EBU (red LED) or S/PDIF input (amber LED).﻿