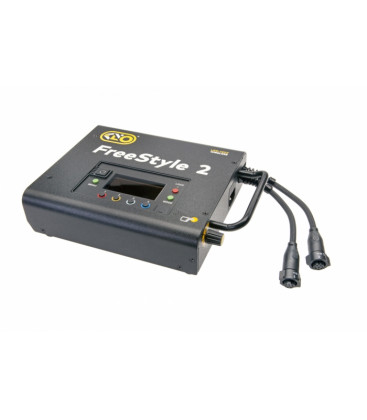 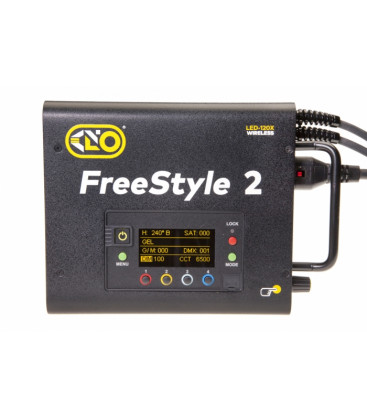 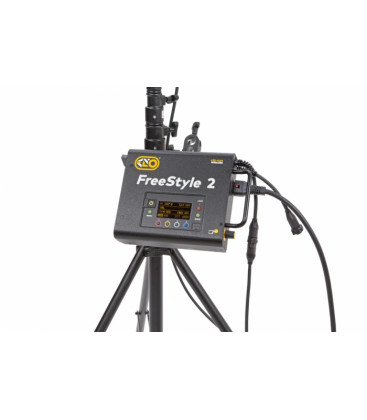 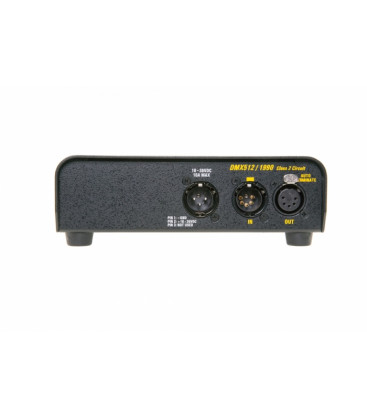 FreeStyle 120 LED DMX Controller, Univ 230U
FreeStyle 120 LED DMX Controller, Univ 230U
1021593
GARANTIE 12 MOIS
Mehr Infos
Kinoflo freestyle 120 led dmx controller, univ 230u
The FreeStyle LED family is known for its >96 white light, full hue and saturation color, cinema gel choices, and RGB chromatic selection via the AC/DC FreeStyle 100Watt controller. It has built-in Lumen Radio wireless DMX; no extra cost for wireless receiver accessories. The light can also be operated directly up to 50 feet away (2 x extension cables) from the controller via Kino Flo head cables. The Freestyle's driver technology achieves bright, soft light with continuous dimming from 100% to 0% on a linear or square curve without flicker at higher camera speeds or at varied shutter angles. There is no light level change when shifting from 2500K to 9900K, and the color doesn't change when the light levels rise or fall.
The White menu features Dimming, tunable Kelvin range from 2700K tungsten to 6500K daylight and Green/Magenta control channels. The Green/Magenta control can be scaled from 0- to 100, where 25 = ¼ correction, 50 = ½ correction and 100 = full correction.
In the Gels/Hue menu, the Kelvin range is extended to 2500K Kelvin to 9900K daylight and a fourth channel is called Gel. The Gel channel includes Kino Flo presets such as blue & green screen, sodium vapor, mercury vapor as well as over 100 well-known lighting gels. The gel function can be applied to any Kelvin temperature and by pushing the control knob in/out, the gel will be applied or removed. A fifth channel called Hue Angle (Hue) and sixth channel Saturation (Sat) are also included in the gel menu. These two channels behave similar to a traditional color wheel, where white light is in the center and Hue Angle determines the color along a 360-degree range and Saturation determines how much color is applied. With the Hue Angle and Saturation it is possible to create over 2 million color combinations!
The RGB color menu gives individual control of red, green and blue LED’s. The RGB mode is a great way to work with apps with predetermined RGB presets or color wheels. RGB menu is also a great feature to dial in specific gel RGB values or when controlling colors from a DMX desk.
The FX (Effects) menu provides access to popular effects such as Candle, Fire, TV, Police, Lightning, Paparazzi, Pulse and Scroll. When on the desired effect, there are several pre-sets as well as control parameters that can be altered. For example, in the Lightning effect there is a “Storm” and “Frankenstein” preset, but it is possible to change Rate to provide additional variation.
True Match 4.0 Firmware update in September 2019 includes groundbreaking features: CIE xy, Camera Profiles LUTs and Color Space selection.
The CIE xy determines the color displayed by its X and Y space coordinates. For example, with a handheld color meter like the Sekonic C-800, users can obtain a CIE xy reading from any light source and input the CIE xy coordinates into the Kino Flo LED fixture to match colors closely.
Camera Profiles LUTs available for the following cinema cameras and more to follow: Panavsion DXL, Sony Venice, Arri Alexa, Panasonic Varicam. Kino Flo’s True Match 4.0 firmware balances their LED lights to the cameras rather than the other way around. The Kino Flo designed tungsten and daylight LED emitters harmonize with the camera sensors even as the color temperature settings are adjusted.
The Color Space defines the RGB color space (white point and RGB primary colors) as a means of matching color points between manufacturing.  Defining the color space takes the guesswork out of post-production workflow and color grading.