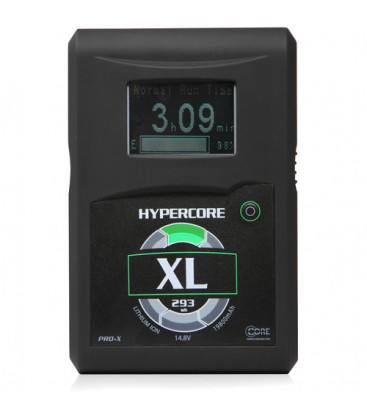 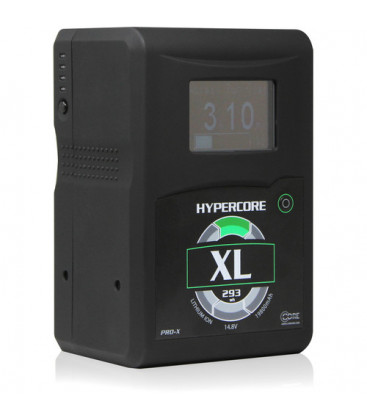 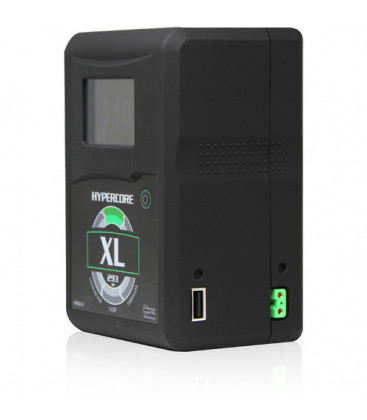 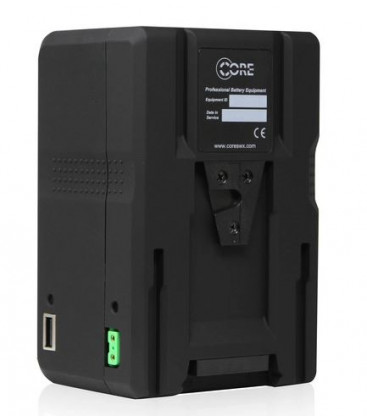 Hypercore XL V-Mount
Hypercore XL V-Mount
1017379
GARANTIE 12 MOIS
Mehr Infos
Core SWX Hypercore XL V-Mount
The Core SWX Hypercore XL 14.8V 293Wh Battery, in a V-mount, carries over all the features the Hypercore series has become known for, but upgrades the draw to 15A (20A at peak). The battery is built around the high C-rated Hypercore cell, which was originally used for a military application. The cells are encased in an over-molded, rubberized housing that protects against impact while providing non-slip handling.
With 293Wh and 15A load, the Hypercore XL can power up to the most advanced cine cameras for extended periods. With a 25W load, the estimated normal runtime is 11.7 hours. Moreover, one of the things Hypercore batteries are known for is outputting the maximum draw without diminishing in service life, and that stands true with the Hypercore XL as well. All this is complemented by a smart LCD, a hibernation mode, D-Tap and USB ports, and wide charger compatibility.
The LCD is large and positioned on the front of the battery where it's most easily visible. It displays runtime in hours and minutes when in use, and provides an estimated runtime based on a dummy load of 30W when in standby. When charging, the LCD shows the remaining charge time. To deliver runtime, the Hypercore XL uses Core SWX's proprietary on-board fuel computer to take an aggregate view of the battery's past usage and charge and discharge performance. In this way, it is able to provide a highly accurate calculation every time. In addition to the LCD, there's also a 4-LED gauge on the side of the battery where it can quickly be glanced over at.
To prevent the common issue of self-discharge when the battery is not in use, the Hypercore XL is designed with a hibernation feature. When there's no usage or movement for 48 hours, the battery goes into a deep sleep and preserves its state of charge. Backing up this feature is a motion-detecting accelerometer tied to a clocking algorithm. Together, these measure how long the battery is not in use and then trigger hibernation. However, upon any movement, the battery comes fully back to life at maximum capacity.
For powering accessories and mobile devices, the Hypercore XL offers one D-Tap port that provides 12 - 16.8V of power and one 5V USB port. The V-mount Hypercore XL is compatible with any Core SWX V-mount charger as well as with IDX and Sony V-mount chargers.
Features
- Supports 15A draws for extended periods (20A at peak for up to two hours)
- Over-molded, anti-impact, rubberized housing
- 293Wh
- Utilizes Panasonic cells
- 11.7 hour estimated runtime based on 25W load
- Large, smart LCD
- Runtime display in hours and minutes when in use
- Estimated runtime display based on a dummy load of 30W when in standby
- Remaining charge time display when charging
- Proprietary on-board fuel computer takes an aggregate view of past usage and charge and discharge performance to provide accurate runtimes
- 4-LED gauge on the side
- Accelerometer/clocking algorithm hibernation feature to solve the issue of self-discharge
- D-Tap and USB outputs
- Compatible with Core SWX, IDX, and Sony chargers