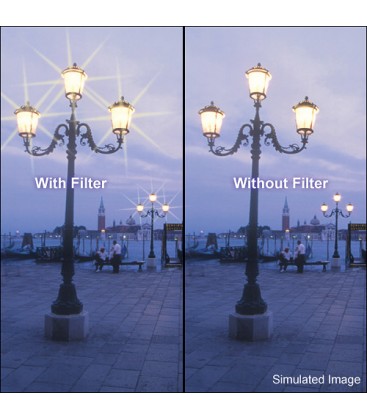 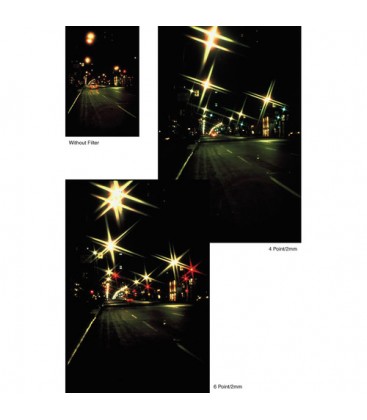 The 52mm 8pt/2mm Star Filter from Tiffen creates multiple points of light, or "stars," streaking outward from a central light source.  This filter comes in a rotating mount for critical placement of the star effect.
Wedding photographers will especially appreciate the value of this filter. When it comes to special effects shots, why not offer your client a table shot of the menu or invitation next to a glowing, star-filled candle? Shooting at night? Make that street lamp take on a different, more dramatic appearance by using the star filter. Any point light source will achieve the effect.
Tiffen's ColorCore glass is produced through a process that entails permanently laminating the filter material in between two pieces of optical glass that are ground flat to tolerances of a ten-thousandth of an inch, then mounting them in precision aluminum rings.
Note: With an 8 point filter, the many star lines may tend to overpower the rest of the image, so use it carefully. Generally, mid-range apertures or larger are sufficient to achieve a good star effect. Always test before critical situations.
- The effect is produced by a series of thin lines etched into the flat optical surface of a clear filter
- The size and brightness of the star lines produced are first a function of the size, shape, and brightness of the light source: You have additional control through the choice of a particular spacing between the lines on the filter
- These spacings are measured in millimeters and range from 1mm to 4mm: A 1mm spacing has twice as many lines as a 2mm spacing and will produce a brighter star for any given source
- Lines in one direction produce a two-pointed star, just a streak through the center of the light
- Tiffen offers 4, 6, and 8 point symmetrical star effects as well as additional asymmetrical star patterns through their exclusive Hollywood FX Series (North, Hyper, Vector and Hollywood star effects)
- Tiffen's ColorCore glass is sealed between two optical glass sheets. In this way, Tiffen can better control the various densities of their filters and thereby create more exact degrees of filtration. This process makes for greater accuracy of color as opposed to glass that is simply dyed and become subject to deviation during the dye process
- Tiffen, a leader in the filter industry, proudly makes its filters in the USA and backs up its products with a solid 10-year warranty